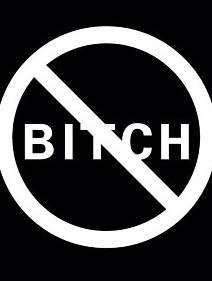 3 Reasons Why ‘B*tch’ is not a compliment

Kanye West has a new, soon-to-be released song called ‘Perfect B*tch’ about his current partner, Kim Kardashian. Ms Kardashian says she is not only flattered by the song but 'honoured'…

Kanye West has a new, soon-to-be released song called ‘Perfect Bitch’ about his current partner, Kim Kardashian. Ms Kardashian says she is not only flattered by the song but ‘honoured’ to be his ‘Perfect Bitch’. Her mum is less impressed, saying, ‘no woman should be called such a term’.

Of course the term is hardly new to mainstream music (See: Smack My Bitch Up) and as we know, words do change their meaning over time. (See: Goddess Kunda or Cunti – the origin of the words ‘country’, ‘kin’, and the word that is considered the worst insult in the English language. I think you can guess which one.)

Bitch is a word that continues to be used primarily as a demeaning and derogatory term. ‘Son of a bitch’ (son of a female dog), for instance, remains one of the most popular insults for men, along with the ‘C’ word, though both specifically insult females. (D*ckhead, though insulting, just ‘doesn’t have the same punch’, most argue.)

Like ‘queer’, however, the term has also been reclaimed by icons like Catwoman (‘Life’s a bitch, now so am I’) and feminist news outlets like Bitch Media. Similarly, ‘chick’ is no longer derogatory in many circles. Chick – referring to a cute and fluffy but by no means bright or powerful baby farm animal – is used by organisations like Business Chicks and proud, self-proclaimed ‘chick lit’ authors including Anita Heiss, who say there is no problem with the term as long as it is not used in a demeaning way. (Personally I don’t like ‘chick’, primarily because of the farm animal reference. But that’s me.)

‘Bitch’ is also sometimes used with irony – ‘You say I’m a bitch like it’s a bad thing’. So, is the use of ‘bitch’ a bad thing?

As I see it, there are three main things to consider:

1 : Bitch refers to a female animal – in particular a ‘female dog, wolf, fox, or otter.’ (For some reason the otter part makes me giggle. You ‘hot otter’, you.)

Where once cultures embraced ideas like ‘power animals’ or ‘spirit animals’, comparing humans to animals is now most often meant to dehumanise and imply that the person is ‘less than’ human, not more than human. Mainstream culture often presents animals as pets to train and own, food to slaughter and consume, exotic things to be seen in a zoo or wild and dangerous things to be hunted or tamed, and therefore references to someone being an animal are generally coloured by one or more of those ideas. And as we rarely think of ourselves as animals, comparing someone to an animal is also a common way of assigning them the label of ‘other’. (See: Dos Equis ad below – “Approach women like you do wild animals. With caution and a soothing voice.”) 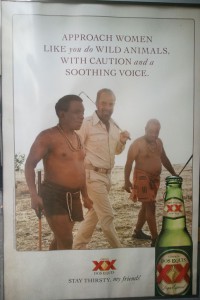 There is a long history of comparing women to animals. Common examples include old cow, ugly dog, cougar, chick, bird, ski/surf bunny and the charming bush pig or hose beast. Catty and bitchy are also common descriptions of women’s behaviour.

2 : The term ‘bitch’ is strongly associated with servitude and ownership, as one owns a pet. ‘I’ll be your bitch’ means ‘I’ll be your servant/I’ll do what you want’, and ‘He’s your bitch’ means ‘You own him’. (Also see : Prime Minister Julia Gillard labelled ‘Bob Brown’s Bitch‘, etc.) In another Kanye West song, for instance, he writes ‘Get ya own dog, ya heard? That’s my bitch’.

There is a long history of women being referred to as belongings, particularly in relation to marriage which was originally a contract of ownership between a groom and the patriarch of a household, hence the ‘handing over’ of a bride from father to groom during the traditional ceremony. The Bible, for instance, had this to say: ‘As a punishment for her initiative in the first sin, the wife is to be subjected to her husband, and he is to rule over her (Gen. iii. 16). The husband is her owner; and she is regarded as his possession (comp. Ex. xx. 17)’. Thankfully, these ideas have changed dramatically, yet even in 2012, brides are still bartered for with cows.

Owning a human in any capacity is a pretty sensitive and awful topic, regardless of gender, but the history of owning women and girls is very different. Even in circumstances of slavery, where both men and women were subjected to ownership by a ‘master’, women appear to have still been worse off, as some laws stated a manservant could go free after 7 years, but not a woman, as per Exodus : “If a man sells his daughter as a servant, she is not to go free as menservants do”. Females were also often made to submit to the sexual demands of a master, were taken as concubines or owned as part of a harem.

I could go on, but I’m sure you get the picture. Women and girls being owned by men is a loaded issue with a long and sad history.

And finally, the obvious. 3 : Bitch is commonly defined as ‘informal derogatory’ for ‘a woman whom one dislikes or considers malicious or unpleasant.’ Or a ‘thing or situation that is unpleasant or difficult to deal with.’ The dictionary definition is not very nice.

So, where does all this leave us?

Ms Kardashian says Kanye ‘doesn’t mean it in a negative way when he says the word bitch’. So how does he mean it? Are traditionally misogynistic terms the new flattery? Would you be ‘honoured’ to be called the perfect bitch by your partner’?