Today is the International Day of the Girl Child, celebrated annually on October 11 to highlight issues concerning the gender inequality facing young girls, including child marriage. Rates of child…

Today is the International Day of the Girl Child, celebrated annually on October 11 to highlight issues concerning the gender inequality facing young girls. Millions of girls around the world are facing challenges to their safety and access to education and health care. Natural and humanitarian disasters also compound this, leading to a dramatic increase in child marriages as families struggle to cope. Rates of child marriage have risen sharply and in some cases doubled in Syrian refugee camps. I recently visited Syrian refugees, aid workers and gender-based violence experts in Lebanon, the country hosting the largest ratio of refugees per capita in the world, to learn more:

The going price for a Syrian child bride in Lebanon is about $US2500, I’m told.

I’m in the country meeting with some of the millions of refugees who have fled the Syrian war. This conflict – raging for over four years now with no signs yet of abating – has caused the largest humanitarian crisis in the world today and the largest movement of displaced people since WWII. Half of the refugees are kids, thousands of whom made the treacherous border crossing alone. More than half are female. This is a crisis with enormous implications for human rights, child rights and future world stability. Despite the enormity of it, the crisis largely fell from the international news cycle until the death by drowning of a boy named Aylan was captured in photographs circulated around the world. When we hear about Syria we see images of adult male leaders, officials and the military, or extremists. We see images of levelled homes and rubble. We too often forget the millions of civilians caught in this, and in particular, we overlook the human beings we cannot see in the vast majority of these images – the women and children. While I am here I will meet with some of them and hear their stories, and one of the stories I will hear again and again is that of the Syrian child bride.

On the ground in Lebanon the human side of the Syrian crisis is less easy to ignore. This small country has been overwhelmed by the influx in the past four years; 25% of Lebanon’s current population are now Syrian refugees, with at least 1.1 million of them currently registered. 594,000 of those refugees are under 18 and 209,000 are under five. Their presence is seen and felt everywhere. There is the frail girl gripping my arm and asking for help on the street, the woman holding a heartbreakingly tiny newborn and waving an empty baby bottle, pleading for help as our UN vehicle passes, the disabled woman who recognises one of the local UNICEF reps and thanks him for helping to arrange emergency eye surgery for her baby girl. This is a country already crippled by inequality, with one third of the Lebanese population themselves living below the poverty line of $3.84 per day. The extreme combination of factors has placed incredible pressure on Lebanon’s infrastructure, water supply, power, roads, schools, and other public services. 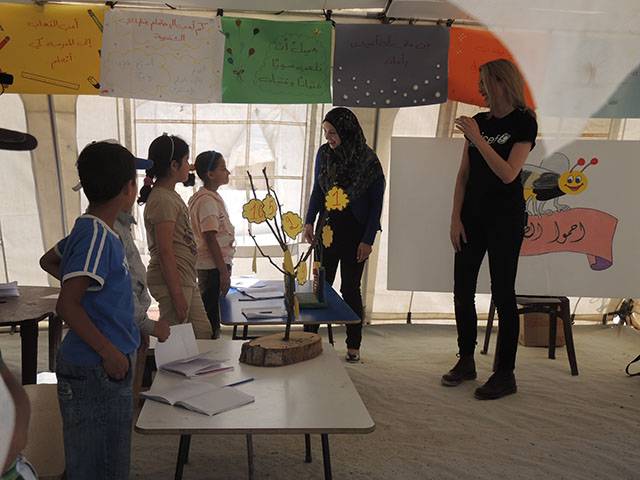 Above: Visiting Syrian refugees in a UNICEF supported educational safe space. Education is just as important for girls as it is for boys. Photograph by Kate Moore.

The vast refugee populations here are living in informal tented settlements, in half-built buildings, sheds, and makeshift quarters, or apartments and empty shop fronts in once functioning areas that have now been essentially abandoned by businesses. In places like Bekaa Valley, where I visit a number of Informal Tented Settlements (called ‘ITSs’, or ‘refugee camps’), they live under tents and cobbled together concrete slabs and corrugated iron sheeting on open agricultural land. This is a very tough way to live, and dangerous. It is already swelteringly hot while I am visiting. In the winter it is sub-zero. Disease is rampant. Food is scarce. While I meet with one family and hear their harrowing story of survival, a fire from a simple cooking accident devastates a camp nearby after a splash of oil ignited one of the tents. In just twenty minutes 84 of these tent dwellings were destroyed, killing a ten month old chid and up to four other children and four adults. I watch the smoke rise in the near distance, feeling like a cold hand has gripped my heart. Many Syrians survive the conflict and the difficult journey over the border only to die in the camps themselves. 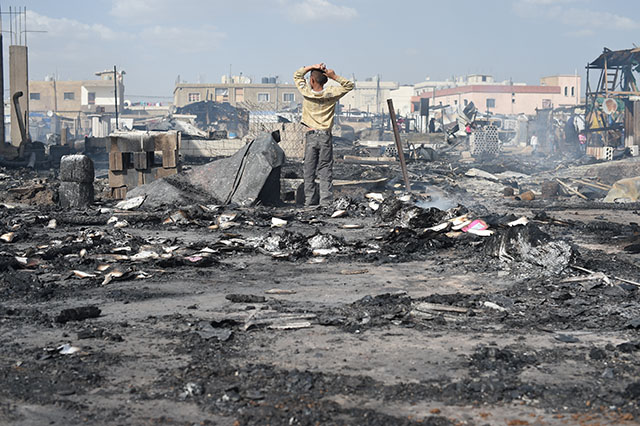 Above: The remains of the fatal fire. Photograph by Alessio Romenzi for UNICEF.

Though it should be obvious, most of us back home do not consider that these little bits of land are not free to live on. Like anywhere else, the land belongs to someone. Rent is about $200 US per month and that money gives you an area of dirt not much larger than a parking spot. Sometimes several families live in one tent in impossibly cramped conditions, in order to share that rent. The local Shawish, or land owner, must be paid and if you can’t pay it, if your family can’t somehow pay it, if UNHCR can’t pay it for you, you are out – but to where? The local and international aid agencies work together to try to fill the gaps, but most receive less than half of their funding requirements. For instance, the response and forecast requirements for UNICEF, who specialise in child rights and protection, education, water, sanititation and maternal health, is only 49% funded. Jordan, Turkey and Lebanon, in particular, are hosting millions of refugees through the generosity and expense of their own governments. After nearly 5 years, resources and services are at breaking point.

“Lebanon needs more support for local public institutions, especially municipalities which have to continue delivering basic services and maintaining a peaceful environment for refugees and host communities… Resources are insufficient. Needs are rising. If we do not bridge this gap, there will be far-reaching consequences for the region and beyond.” –  UN Secretary-General Ban Ki-moon.

Basic aid and services are often unavailable. In this context, the steep rise in child marriage takes on new meaning. The common payment of roughly $2500.00 for a child bride is enough for a Syrian refugee family in Lebanon to pay their rent for a year, and crucially for these struggling families, it means there is one less mouth to feed. Sometimes it is a landlord who makes this offer to families of girls as young as 12, in exchange for that rent. Other times it is a local man with enough money. In the camps themselves, child marriage is also on the rise as parents look for ways to protect their daughters. A husband, even if he is practically still a child himself is deemed better than none at all. (There is a rise in child marriages between children, as well as a rise in child brides generally, though older grooms with child brides are more common).

Above: Violence against women and girls, child exploitation and child marriage increase in times of humanitarian and natural disasters. UNICEF’s local partner agencies and volunteers in Tripoli give women and girls a safe place to rebuild their lives. Photograph by Alessio Romenzi for UNICEF.

Increasingly there is also an organised trade in Syrian girl brides. “Some men now say they prefer them’, one Lebanese aid worker tells me, ‘because they are beautiful and obedient.” Men from other countries have begun contacting refugee families in pursuit of these young girls. There are some heartbreaking tales: ‘They offer five thousand dollars and make promises of protection and honourable marriage. The girls are sent back months later, pregnant, and there is no money. There was no marriage.’ The betrayal and humiliation these girls experience is a silent one. Unmarried, pregnant, rejected, and living in the precarious conditions of a refugee camp, all before the age of sixteen.

“Every family says the same things: that they’re doing it to ‘protect her’,” explains UNICEF Lebanon’s Soha Boustani.

The rise in Syrian child brides has arrived from a complex mix of old dowry rites and the vulnerability of millions of refugees living in poverty. “Families start to see that there could be a price tag for their daughter,” Jihane Latrous from UNICEF Lebanon explains. “Give me your daughter and you don’t pay rent for three months.”

In a refugee camp on the outer reaches of the city of Tripoli, I meet a young woman of 16. She’s a child bride, having been married at 14 to try to protect her from the threat of rape at the hands of militant forces in Syria. She is hunched over, sitting on the floor with me. She looks much older than she is – her eyes are old, hardened. “We all heard the stories about the rapes,” she says. Her family heard about this violence against women and encouraged her to marry as soon as possible. She married at 14 and like many child brides, fell pregnant early and suffered with the complications common to children bearing children – anaemia, blood loss. Now this girl, still a child herself, is in a camp with a child to care for.

Above: Speaking to a Syrian child bride in a camp in Lebanon. Her face is hidden for anonymity. Photograph by Alessio Romenzi for UNICEF.

At a shelter in Lebanon’s Bekaa Valley, one of UNICEF’s local partner agencies gives girls a safe place to rebuild their lives after physical and sexual violence, and protects others from the risks associated with child marriage. The girls I meet there are wearing colourful clothing and hijabs. Some are holding each other’s hands like lifelines. After some initial shyness, they tell me their stories. Most have been dealing with the pressure to marry from the age of 12.

“I tell [my family] I am not ready for a husband,” one of them announces, and there is applause from her peers. They want to be teachers, lawyers. “Of the rights you have learnt about,” I ask, “which surprised you the most?”

At this the girls animate, hands shooting up. “Rights? We didn’t know women had rights,” several of them say.

Knowledge empowers, but these girls need more. They need a world that respects those rights. And more than anything, they need the war in Syria – and the war on women – to end.

– Tara Moss is a journalist, child rights and women’s rights advocate, and UNICEF Australia’s National Ambassador for Child Survival. She has been with UNICEF since 2007. Her role is unpaid. To donate to UNICEF: unicef.org.aumoss

– A shorter version of this piece is published in the current October Marie Claire magazine, Australia, republished here with kind permission.

– Related: A recent UNHCR report found that a full four-fifths of the world’s refugees are being hosted by developing countries.

– Related: In 26 countries, girls more likely to be married off than go to high school.