I am sitting cross-legged on a concrete slab in a home that is not a home. This is a makeshift shelter of corrugated iron and plastic sheeting, about the size…

I am sitting cross-legged on a concrete slab in a home that is not a home.

This is a makeshift shelter of corrugated iron and plastic sheeting, about the size of a parking spot, and it accommodates a displaced Syrian family with three young children. There is no door. Directly outside the open entrance is the dust and weather of the Bekaa Valley in east Lebanon, bringing extreme heat in the summer and sub-zero temperatures in the winter. To enter this home, you walk between makeshift dwellings, ducking beneath cobbled-together electrical wires which are shared between shelters as their only source of power – when they can get any power. The mother who has so graciously welcomed me inside tells me they have lived here for about two years. Prior to this they were in another refugee camp, sharing a tent with 20 people.

They rent this small, neatly arranged space for $US200 per month and it contains their only possessions – some cushions on a dusty concrete floor, a rug, a fridge, a couple of toys and well-worn clothes. This is all they have but this is not “home” for them, in the real sense. Home is a powerful word here, evoking a safe and familiar place deeply missed. This family had a home in Idlib in the north-west of Syria before they were forced to flee the violent conflict out of fear for their lives and the safety of their children. They had a normal life, a normal home. Now they don’t know if that home even exists. Many houses there have been reduced to rubble. She might live in a refugee camp but like children everywhere, Reem, 4, still seizes every opportunity to play.  Photo: Alessio Romenzi

Reem is the eldest child in this family. She is four and has spent half her life in this camp. She smiles and communicates in the way children do even when there is no common spoken language – making eye contact, pointing, giggling. We first met in a UNICEF-funded Play and Learn informal education class nearby, in a safe fenced-off space within the sprawling settlement. We connected immediately. Now I am seeing the conditions she lives in. My daughter, Sapphira, is the same age, but the challenges Reem faces are vastly different. Many refugee children survive conflict only to be killed by the poor living conditions in these places – disease, electrocution from unsafe wiring, burns from domestic accidents, pneumonia in winter. Displaced children are much more likely to experience abuse, violence, sexual exploitation, child labour and early marriage. And yet Reem is touching my hand, showing me her swing, making faces with me, laughing. She is brave. A survivor.

My daughter knew I would be travelling to some challenging places in Lebanon, and she wanted me to  take her favourite Wonder Woman toy  for protection – a talisman straight from a child’s imagination. I show Reem and her mother the family pictures I brought to share what I can of my life, as they are so kindly sharing theirs with me, and when I take Wonder Woman out of my pack and explain her purpose Reem’s eyes light up. She accepts the toy, animating the arms, the legs. Now Wonder Woman is walking. Now she is flying. Reem’s three-year-old brother, Omran, watches, fascinated, then finds his battered toy truck and shows it off. After a time, Reem gives Wonder Woman back, ducks away and emerges with a small toy bunny, a return of the show-and-tell game with my daughter across continents.

I am struck by how diligently her mother has worked to protect her from the many traumas suffered by the children of Syria, because it shows in Reem. When she first came to the Play and Learn program she was very withdrawn but, through the program and her mother’s efforts, she is playful again. Many kids in these camps are so traumatised, so psychologically injured by their experiences in Syria or in the harsh camps themselves, they no longer engage with the world at all. But Reem does, and right now she is breaking my heart. The remains of homes in the Idlib district of Syria, 60km from Aleppo. Reem and her family left Idlib, fearing for their safety. Photo: UNICEF

The stifling heat and close walls of plastic feel as if they are closing in on me. I have seen great suffering and injustice in my days here, but connecting like this, sharing toys and stories, has me unexpectedly at breaking point. I packed very light and I am still wearing a pair of jeans I wore to a child’s birthday party in Sydney just before my flight to Beirut. I realise that somewhere are microscopic traces of birthday cake, of the kind this girl is unlikely to ever see. I nod and smile and manage to ask some further questions through the UNICEF interpreter but, under it all, I am not quite functioning any more.

As deplorable and precarious as these conditions are, aid workers have explained this is essentially a “five-star” settlement. The others are simply too dangerous for me to get security clearances to enter. In other words, this is the good version of being a refugee child right now, the version where UNICEF, UNHCR and Lebanese Not-for-Profit partners are involved, providing safe play spaces, psychosocial support, mobile medical checks, informal education, albeit on a budget that must be stretched and stretched to accommodate increasing numbers as the violent conflict rages on, over four years now, leaving millions displaced. There are not enough resources to reach everyone, or to provide even for basic needs. There are more than 1.2 million Syrian refugees hosted in Lebanon. They make up roughly a quarter of the population of a country already crippled by inequality, with one in three Lebanese below the poverty line. More than half of the refugees here are children, some of whom crossed the dangerous border alone. This humanitarian crisis is so large, so protracted, there simply are not enough funds.

I say my goodbyes, wriggle into my backpack and duck outside to walk alone beneath the hanging wires between the shacks, back towards the car, leaving the crew for a moment. Tears spring from my eyes, streaming beneath my sunglasses. I could feel it coming and I am angry at myself for crying, but at least I did not cry in front of Reem and her mother. 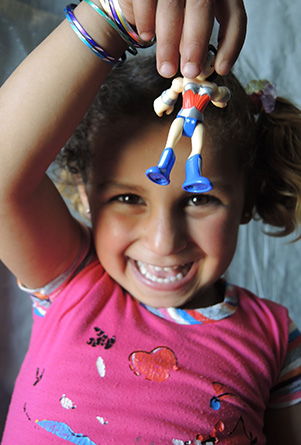 At left: Tara Moss gives eight-month-old Nour a cuddle after she receives her oral polio vaccine in a mobile health clinic that visits each informal refugee settlement just once a month. Photo: Alessio Romenzi. At right: Reem, 4, plays with Sapphira’s Wonder Woman toy in a game of show-and-tell across continents. Photo: Kate Moore.

In the time we were playing another settlement nearby has burned down, killing a 10-month-old toddler and up to four other children and four adults as well, all because of a simple cooking accident that set a tent alight and ripped through the entire refugee camp of 84 dwellings in roughly 20 minutes. We see the plume of smoke rising in the distance. To say that the feeling of inadequacy is striking in these situations is putting it mildly. Sure, I can  visit and hear the stories, report on the deplorable conditions and fundraise as I have tried to do for eight years now, for the kinds of vital UNICEF programs that give girls like Reem a safe space to play and access education. But I know it isn’t enough. It is nowhere near enough. I feel powerless.

Reem, and the millions of children like her, live with uncertainty and danger no child should have the face. She is facing it bravely. I will return to Australia, back to my family and my daughter whom I desperately miss.

Going home is something the children of Syria cannot do. 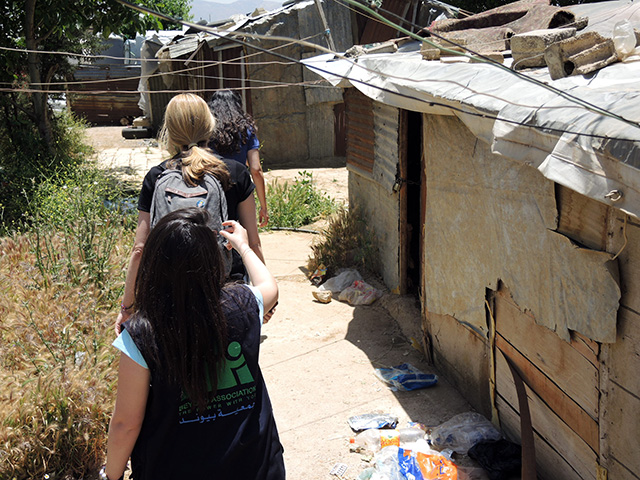 Tara Moss walks through the informal refugee settlement with aid workers from the Lebanese not-for-profit Beyond Association, towards the dwelling Reem shares with her parents and two siblings. Photo: Kate Moore. 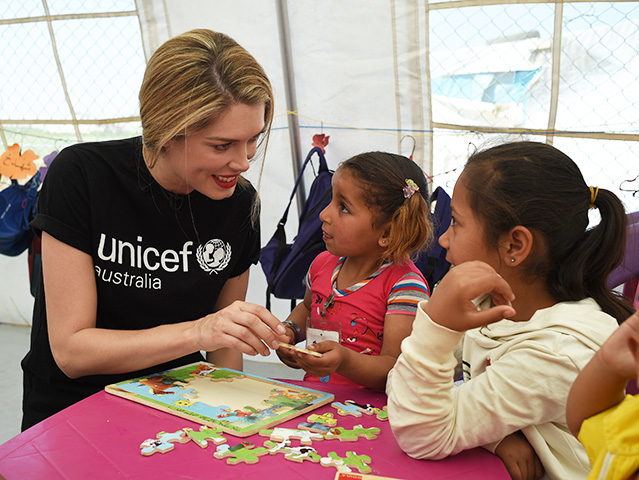 Tara Moss plays with four-year-old Reem and her classmates in a UNICEF supported ‘Play and Learn’ safe space for children in the camp. The informal school runs for 6 hours a day, providing education and a place for child safety in the dangerous camps. Photo: Alessio Romenzi.

* The article first appeared in the Sun Herald, SMH, and The Age under the titles ‘One brave girl’s story shines amid shocking scenes of hardship in a sea of Syrian refugees’ and ‘UNICEF Ambassador Tara Moss’s Refugee Camp Heartache’.

* If you are interested in how to help Reem and others like her, you can go to the appeal at unicef.org.aumoss