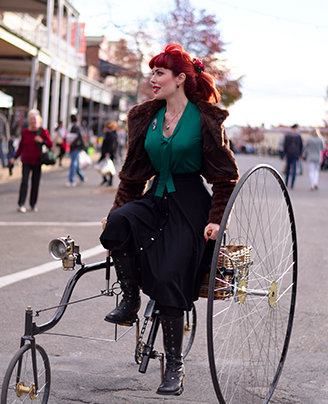 Over the long weekend I had the pleasure of spending time in the town of Grenfell, NSW, as the official special guest of the 60th Henry Lawson Festival of the…

Over the long weekend I had the pleasure of spending time in the town of Grenfell, NSW, as the official special guest of the 60th Henry Lawson Festival of the Arts. The beloved Australian bush poet and author Henry Lawson was born in a Grenfell gold field in 1867, to one of Australia’s most influential suffragettes, the publisher, writer and social reformer Louisa Lawson. 150 years later, the town of Grenfell again remembered their most famous son with a weekend of festivities that brought the community together.

In true country style, I arrived to fresh, homemade soup prepared by our host, Pam, before attending the local high school to see some of Grenfell’s young talent perform. On the Saturday I gave a speech to some thousands of locals and visitors on the main street, and that evening participated in the awards night for the festival’s nation-wide writing and photography awards. I had the great pleasure of meeting many lovely locals in Grenfell, and some truly extraordinary women, including WW2 veterans and pioneers for equal rights. Previous official guests of the festival include Professor Marie Bashir, Dr Hilarie Lindsay, Thomas Keneally and Slim Dusty, and it was an honour to be the special guest for the milestone of festival. I’ve been told some would like to keep my words of encouragement, so a transcript of my speech is below: (Like most speeches it is written for live reading, and is less suited to the page, in my view, but I’ve resisted tampering with it.)

Thank you for the honour of opening the 60th Henry Lawson Festival here in beautiful Grenfell, the birthplace of Henry Lawson 150 years ago.

I’d like to begin by acknowledging the Wiradjuri people, the traditional owners of the land on which we meet, and pay my respects to their elders past, present and emerging.

I hail from a small town on Vancouver Island, Canada, and after travelling the world I called Australia home 21 years ago and have never looked back. I am proud to be an Australian citizen and to be one of the lucky ones able to do what I love for a living, as a novelist, author, documentary maker and journalist.

It’s not easy to make a living as a writer, or in the arts. It wasn’t in the 1800s and though much has changed, the same holds true today, particularly with the publishing and media industries in turmoil. In fact, a 2015 report showed that Australian writers averaged just $12,900 in income from their creative writing work. Here and abroad, income from writing is not enough alone to support the vast majority of writers. But the written word can be powerful, even more powerful, I’d argue, than TV and film – mediums I also love, and mediums that also require great writing. A book makes the reader an active participant. It engages the imagination. Books allow us to step into the shoes of other people. They flex our empathy muscles.

Supporting local authors and keeping storytelling alive, in every form, is as vitally important now, as it has ever been. It’s something you can’t put a dollar value on.

When I think of Henry Lawson I consider his cultural contributions through storytelling, his strong and enduring legacy, and that it was the legacy of a man who contributed much, though he struggled. He became deaf after an ear infection and his deafness caused him difficulties in school. He was described as shy and isolated. What he contributed was the gift of his words, and that gift endures to this day.

I think also of the strong influence of his feminist mother, the suffragette Louisa Lawson, who was a poet, writer and publisher in her own right, and who published Henry’s first volume. Prefixed to his first published poem in 1887, it reads:

In publishing the subjoined verses we take pleasure in stating that the writer is a boy of 17 years, a young Australian, who has as yet had an imperfect education and is earning his living under some difficulties as a housepainter, a youth whose poetic genius here speaks eloquently for itself.

Would Henry have imagined that now, in 2017, there would be the 60th anniversary of a festival in his honour? That he would be remembered?

Much has changed since he wrote The Drover’s Wife and The Loaded Dog. The pace of life. Our influences and opportunities. These are times of franchises and strip malls, TV, video games and smart phones, and among many positives it is nonetheless a time when poetry and the written word, the arts and local community, are to my mind not given enough due.

This is why it’s an honour to be here, to remember history and the Lawson family but also, perhaps especially to celebrate the arts and the young, up and coming artists, poets and storytellers of tomorrow – Australian stories and Australian voices, Indigenous and non-Indigenous voices. Those voices matter. We cannot simply import our stories. We must know our own.

I wrote my first little novelette at age 10, sharing it with my classmates at Torquay Elementary school back in Canada. I wanted to be a novelist but it seemed like an impossible dream. I couldn’t have imagined then that I would become a published author of 11 books so far, out in 19 countries and over a dozen languages. Perhaps there is a ten year old out there, hearing this right now, who has similar dreams. To that young person I say, go for it. Don’t let others expectations of who you are or what you are capable of get in the way of that dream. We need your voice.

To all of you, I say thank you for inviting me into this gathering, this celebration of the arts and your community. It is a honour to be here and I look forward to the weekend ahead. 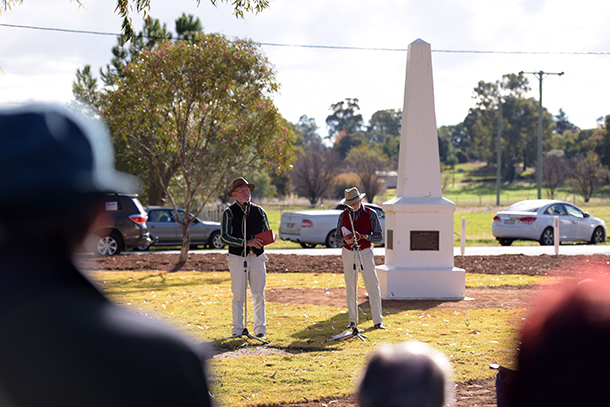 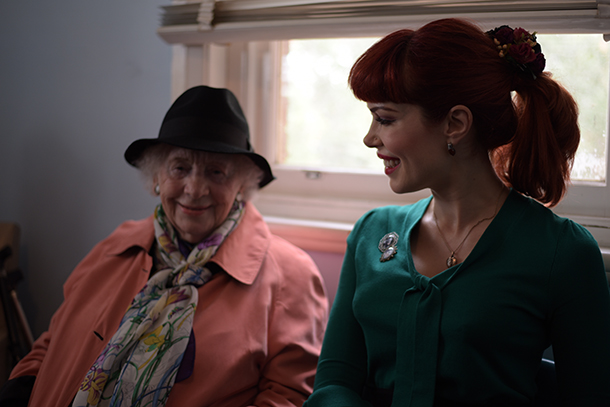 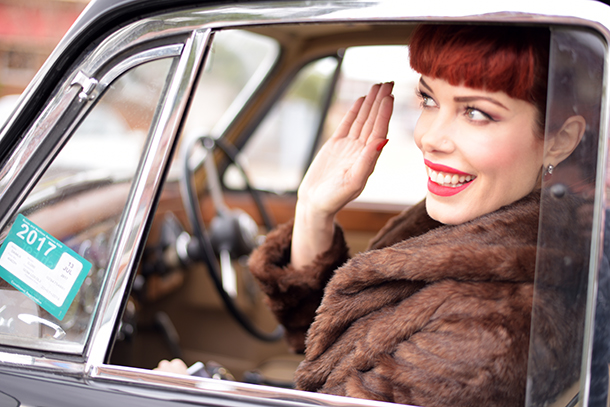 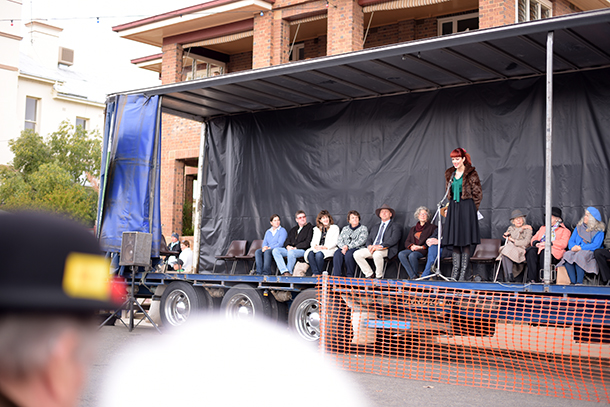 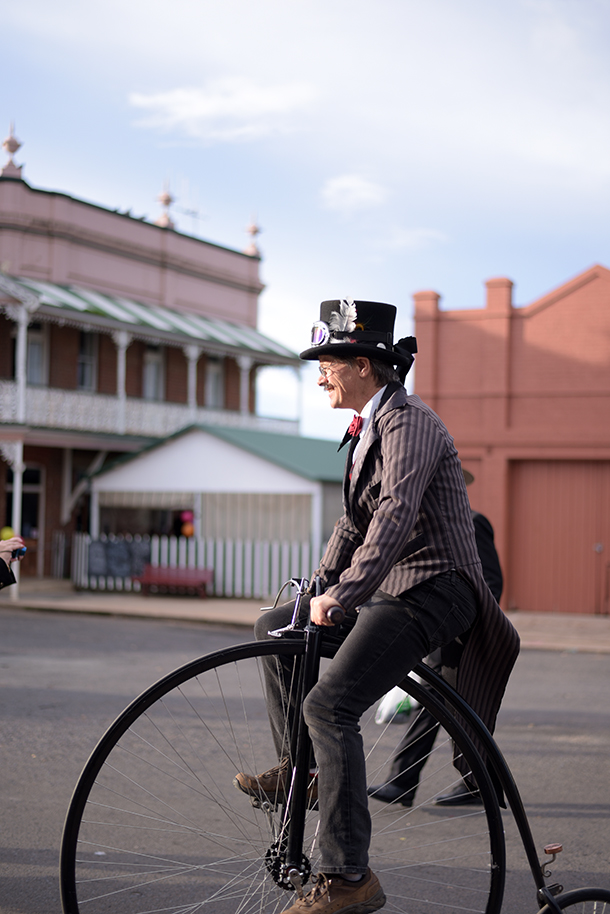 Above: Henry Lawson readings, talking with WW2 veteran and Patron of the festival Kathleen Smith, arriving down Main Street for the official opening, speaking from the main stage and enjoying an impromptu spin on one of the old-school cycles at the end of the day. Photographs by Berndt Sellheim.