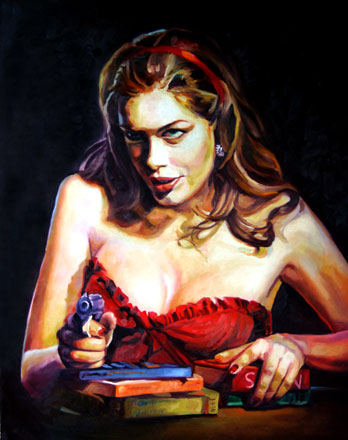 Eve was the first bad girl, and ever since, women have been linked in the popular consciousness with the concept of sin and their sins with sex.

CAPTION: The portrait Schooled to Kill, by Rosemary Valadon is featured in Wicked Women, a new exhibition at the Justice and Police Museum.

EVE was the first bad girl, and ever since, women have been linked in the popular consciousness with the concept of sin and their sins with sex.

Mae West once quipped that there are ‘no good girls gone wrong, only bad girls found out.’ And she has a point, if you consider that Eve’s sin was to ‘eat from the Tree of knowledge.’ The Good Girl standard then, of passivity, obedience, lack of curiosity about flora and fauna, (including speaking snakes) and a general disinterest in knowledge, would surely make being ‘a good girl’ a near impossibility. And not much fun, by the sounds of it.

I confess. I have killed men with shotguns, knives, hatchets, fire and even a poisoned apple pie, amongst other atrocities. But all of these were in fiction. I am no femme fatale, despite what Rosemary Valadon’s portrait (above), titled Schooled To Kill might suggest.

But if you believe women to be morally weak, as did Freud, who believed we possess ‘little sense of justice’, or the Greek philosopher Plato, who in Timaeus offers that women are the reincarnation of men who have lived evil lives, and as such, are morally flawed…well, it should be pointed out that I have displayed suspicious behaviour from a young age.

I was a serious Stephen King fan when I was ten, and one of his most popular books at the time was Christine, about a demonic car that ran over and brutally murdered the classmates of its owner. Naturally, I did what any other budding young writer would do – I wrote a ‘homage’ starring my classmates, each of whom met with a grisly demise under the wheels of this possessed car.

In my story, the car was black and white instead of red and white, hence the title, Black and White Doom. Doom, of course, being a cool word for ten year olds.

My classmates actually asked to be written in and killed off, hence the reason I was flattening little Johnny in Arbutus Drive, such is the morbidity of ten year olds. (So I guess we can add homicide by motor vehicle to my long list of crimes)

Of course, if I were a student in this post-Columbine massacre environment, writing a gruesome story like that would probably see me hauled off and given psychiatric treatment. Instead of being sent to an institution for the criminally insane, I managed to use this early readership to inform my career as the perpetrator of fictional homicides.

Such a thin line.

The Femme Fatales of those popular detective novel covers could argue that they aren’t bad, they’re just drawn that way.

And as for real life female criminals?

Though the ‘wicked woman’ has been constant presence in popular thinking since biblical days – from ‘Femme Fatale’ temptresses, to evil witches, to ‘mean girls’ – the fact remains unarguable – dangerous social behaviours and acts of aggression and harm are overwhelmingly perpetrated by males. Despite an increase in female criminals there are still 13 times more men in prison in Australia than women. Men commit 90% of homicides, are 400% more likely to injure, 2800% more likely to rape and among that most terrifying and rare of killers – the serial killer – women remain exceedingly rare. (Read more in my SMH piece, Mean Boys The Worst Culprits)

Far from the Femme Fatales of pulp fiction, the history books show women who thieved to eat or to feed drug dependencies, or were arrested for bigamy, performing illegal abortions, or simply for being pregnant and unmarried, like many of the convict women who were shipped to Australia’s notorious ‘Female Factories’ in the 19th century. In 1828, for instance, Prudence Clare was sent to the Female Factory in Tasmania (then Van Diemen’s Land) for ‘being unable from pregnancy to be any longer of service to her Master’. The children of these women were taken away from them once they were weaned and many died.

And still others like 19 year old Sydney-based Annie Gunderson, evidently did time for fashion. Annie stole a fur coat. In her 1920s mug shot, she is pictured wearing the most enormous fur coat I have ever seen. One wonders if the police thought to ask her about it.

Then there was Sydney prostitute Dulcie Markham, famously arrested in her underwear, wielding an axe as she chased a client down a city street. “The bastard insulted me about the price [for sex],” she said.

There are of course, some notable larger than life, Sydney underworld legends, like sly-grogger Kate Leigh and brothel madam Tilly Devine. Despite the reality of these women and the plethora of images and documents we have to illustrate their lives, when it came time to portray them on television, the notoriously tough women were depicted as Femme Fatale-style beauties. Kate Leigh was even introduced to viewers nude in the bath. As I wrote for SMH:

THE camera zooms in on a beautifully pedicured foot and pans up a shapely leg. It’s Kate Leigh, ”Queen Kate”, reclining in the bath. ”Hang on to your hats,” the voiceover says, ”it’s not going to be pretty.” Oh, but it is.

Before long, this formidable female crime lord steps out of the tub and shows us a beautiful flash of breasts. She stands naked before the man who offers her a towel. She is confident. She is tough, unquestionably sexy, the screen version of the female criminal.

This recent incarnation of the ”deadly woman” is found in Underbelly Razor, the latest instalment of Channel Nine’s highly successful crime drama franchise.

Razor (based on Larry Writer’s fascinating nonfiction book of the same name) portrays two of Australia’s most notorious female criminals – the sly-grogger Kate Leigh and the brothel madam Tilly Devine – as beautiful women at each other’s throats. It’s entertaining stuff. Though Razor is ostensibly based on real events, lead actors Danielle Cormack and Chelsie Preston-Crayford bear little resemblance to the real Kate and Tilly, apart from their fetching pin curls, feathers and frocks.

Had Razor‘s Queen Kate looked more like the woman herself (above) – heavy set, with belly and breasts thrust forward under a pleased grin, seeming to wear her extra weight luxuriously and with pride – that opening sequence in the bath would have been very powerful indeed, though in a very different way. (Read more in my SMH piece Beauty Obscures The Beast)

Colourful, ballsy, dangerous or sad, criminal women are real women with real stories. And so despite having so far featured two female villains in my crime novels, neither of them are film noir-style Femme Fatale vixens.

Oh, I tried to believe in the existence of a cool blonde with immaculate Veronica Lake waves and un-smudged red lipstick, reclining glamorously with one leg over the arm of her chair, cigarette held elegantly in one hand, the other one aiming a Saturday Night Special at her surprised male victim.

But when I tried to find her, frankly, she wasn’t in the case studies.

What you see when you pry open case studies is that very juxtaposition; the fantasy bad girl VS the reality. Real life ‘bad girls’ don’t make crime look like a breeze.

Their incredible faces, and the look in their eye tells a story quite different to what you find in those delicious glossy detective novels of Femme Fatale fame.

As for me, I will continue to be fascinated with both the Femme Fatale archetype, and the real-life female outlaws, knowing more than ever, the two are worlds apart.

And I will happily keep my crimes to the page.

Rosemary Valadon’s series of wicked portraits were inspired by the 2009 Femme Fatale exhibition of photographs of real-life female criminals which were shown alongside pulp fiction covers. She was struck by the contrast. ”In pulp fiction, they were painted as glamorous, seductive and dangerous – all the things that bad women are supposed to be,” Valadon told SMH in Pulp Depiction.

* Some sections of this post have been adapted from a speech I gave at the Justice & Police Museum in 2009 when I opened the Femme Fatale exhibition, transcribed by the ABC here.