The Fictional Woman has won Best Non-Fiction Book Design at the 63rd Australian Book Design Awards, for designers Tara Moss and Matt Stanton from HarperCollins. Here's how the cover happened:

May 2014: Not so long ago, in a studio in Sydney, we shot the cover of my first ever non-fiction book. The experience was unexpectedly cathartic, and for the photographer, makeup artist and crew, a touch confronting, I was told.

The Fictional Woman is part memoir, part social commentary and very in keeping with my non-fiction writing of recent years. It draws on my lived experiences to enter a broader debate about the experiences of women and girls today, in the culture I know best, backed up (as always) with data. I make no claim of universality, but the stories will be relevant to many, I believe. In truth this is a book I’ve been storing up for decades, so when it came time to think about the cover, I at first struggled to imagine how the pages inside could possibly be represented. It wasn’t until I had finished years of writing and researching the book and had completed the first draft that the idea came to me:

‘Close up portrait…over the face are the words or labels used to describe (the fictional) me. Each label is a common stereotype – both bad and good – and many are contradictory’ – Sept 27, 2013

My face. My fictions.

I chose labels or ‘fictions’ I had worn for some time – some worn willingly, others unwillingly, some complimentary and some negative, some absolute nonsense, many contradictory, but each label packed with its own baggage. I chose 16 ‘fictions’ or labels and later narrowed it down to 13 that could fit. All of them are very personal to my lived experience, and you can see them on the finished cover.

(*This wasn’t the first time I was involved in concept and design for my own book covers. I designed the original cover for my first novel, Fetish, back in 1999, and like to be involved in all aspects of my work and its presentation.)

I had not initially hoped that we could fit all the relevant fictions I had personally worn, literally on my face, and still have all of them readable. I imagined we’d have to do it digitally if we used more than five of my chosen ‘labels’. But that’s where the wonderful direction at HarperCollins and the artistry of Becca Gilmartin (shown above, and below) came in. HarperCollins mapped out the words I’d chosen, designing the fit on my face using an old image of me – as seen in my hands – in the hopes that we could make it work directly on my face. (We did clean shots as back ups in case it didn’t work out.) Becca used that guide to draw the words directly on my skin in body paint, one at a time, over the period of several hours as I sat under the lights. She needed to carefully extend the necessary letters as they curved back with the contours of my face, so that they were each readable from the perspective of the lens.

If I so much as smirked, my dimples ate letters or entire words.

Rather than adding the labels digitally, or indeed manipulating the image digitally in any way (apart from the book title and my name at the bottom of the cover, there has been no retouching/manipulation) we were able to do it all organically, stage by stage, much as the labels themselves had appeared in my life. 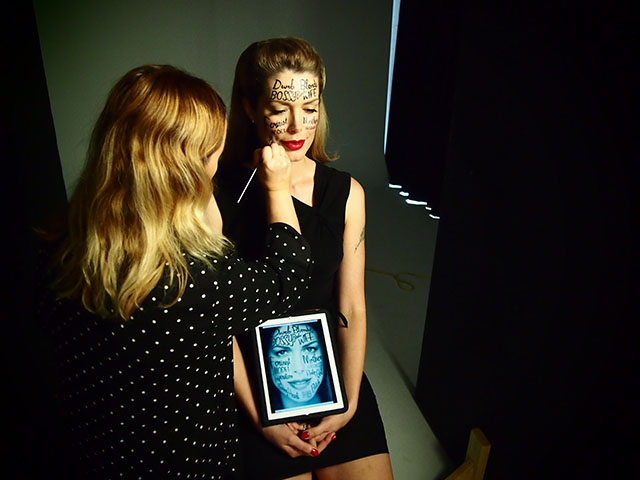 Becca commented several times that she felt upset having to write certain words on me. Other labels were more positive, and felt good to spell out on my skin. As the crew and publishers watched, two decades of my life was distilled to fictions imprinted on me by others. In a way, it felt like a 5 hour performance, symbolically representing the past twenty years of my life as I moved through various ‘labels’.

We all live with labels, stereotypes or ‘fictions’, one way or another. Some are more obvious than others, but they are rarely so easy to wash off at the end of the day. (Thank goodness we didn’t use permanent marker.)

The Fictional Woman will be launched on May 22nd with HarperCollins Australia.

Above is the book trailer, with the shoot captured by Paul Murphy and featuring photographer Steve Baccon and makeup artist Becca Gilmartin. Below is the finished cover, shot by Steve Baccon: (PS Thank you for the lovely pre-ink hair and makeup, Rachel Montgomery.)

These are my fictions. What are yours? 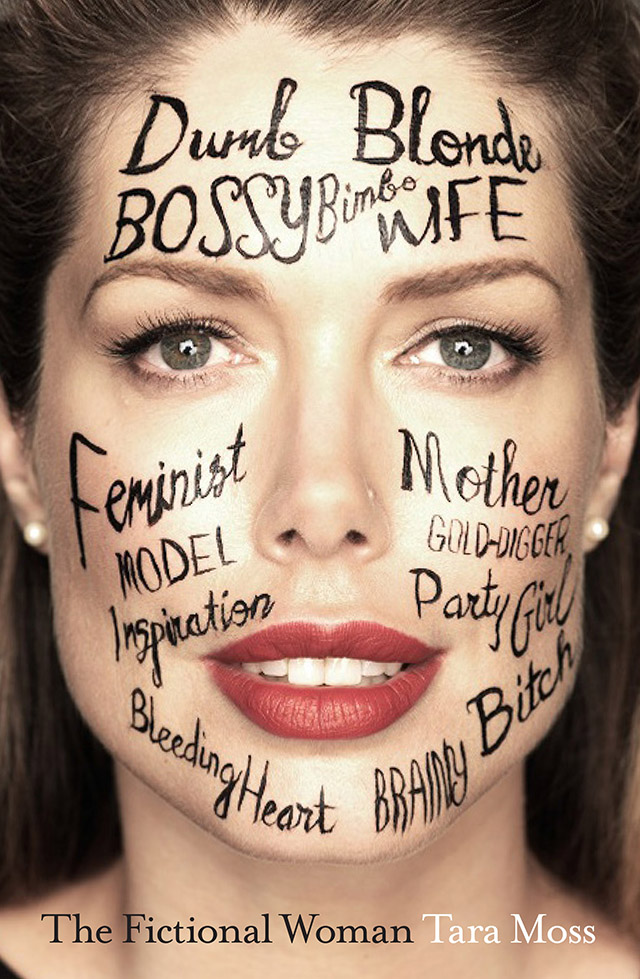 Tara Moss has worn many labels in her time, including ‘author’, ‘model’, ‘gold-digger’, ‘commentator’, ‘inspiration’, ‘dumb blonde’, ‘feminist’ and ‘mother’, among many others. Now, in her first work of non-fiction, she blends memoir and social analysis to examine the common fictions about women.

She traces key moments in her life – from small-town tomboy in Canada, to international fashion model in the 90s, to bestselling author taking a polygraph test in 2002 to prove she writes her own work – and weaves her own experiences into a broader look at everyday sexism and issues surrounding the underrepresentation of women, modern motherhood, body image and the portrayal of women in politics, entertainment, advertising and the media. Deeply personal and revealing, this is more than just Tara Moss’s own story.

At once insightful, challenging and entertaining, she asks how we can change the old fictions, one woman at a time.